What is the Meaning of Civil Services?

A Brief History of Civil Services in India:

Values and Code of Ethics required for Civil Services:

Code of Ethics: There are certain values and standard of ethics which should be followed by every Civil Servant and also promoted by The Government of India:

Values: A member of Civil Services should always work by maintaining integrity, the law of the nation, national pride, allegiance to the constitution, the devotion of the duty, honesty, transparency, and impartiality.

What are the Responsibilities of a Civil Servant?

The main responsibility of a Civil Servant is to implement the policies created by the Central Government on the ground level and run the administration of India. The entire country is run by a number of Central Government Agencies in accordance with policy direction from the respective ministries. The real Policy and Indian Lawmakers are these Civil Servants and work for the elected government as per the government's interest. 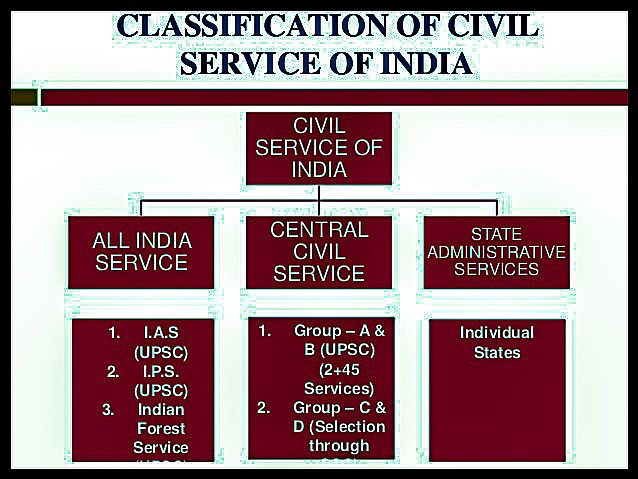 Civil Services can be divided into two category-

Order of the Civil Services Posts:

Appointment of this category is made by the President of India.

All the appointments under Central Civil Services- Group A are made by the President of India and are falls under the administration of the Union Government.

Group-B Civil Services post is filled by Staff Selection Commission Board via the Combined Graduate Level Examination (CGLE). All the appointments are made by the authorities specified by the general or special order by the President.

Every state also conducts the State Civil Services Examination and recruitment is conducted by each state individually. All these appointments are made by the Governor of the state.

Group B State Civil Servants deal with land, revenue, agriculture, forests, education etc. These officers are recruited by the respective State Public service Commission and Appointed by the Governor of the State.