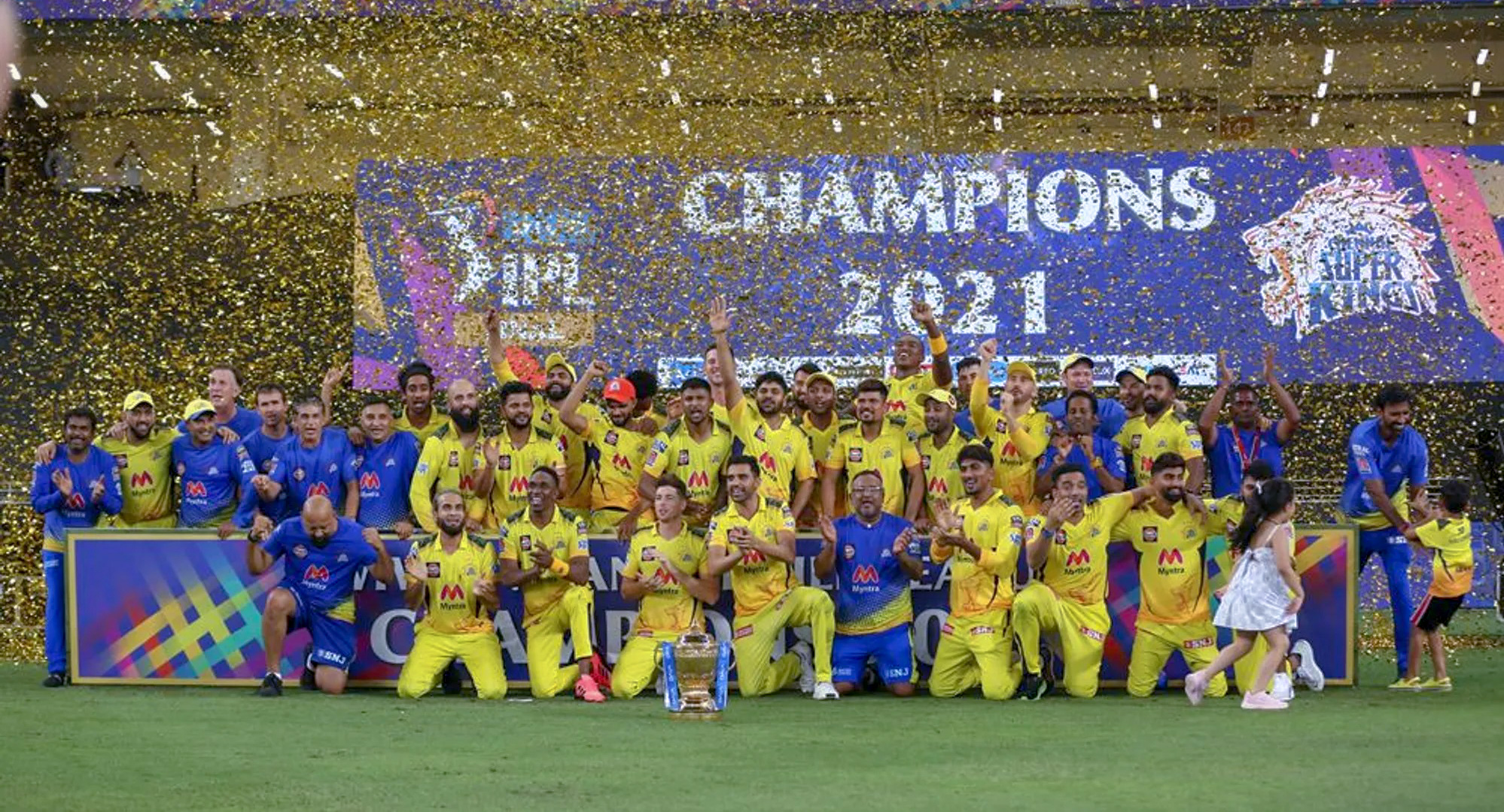 It's the Fourth title for Chennai Super Kings! 2010, 2011, 2018 & 2021!  Chennai Super Kings (CSK) won their fourth IPL title on Friday with a victory over Kolkata Knight Riders (KKR) in Dubai's VIVO Indian Premier League 2021 final. Faf du Plessis' 86 helped CSK post 192/3 on the board, and they limited KKR to 165/9, securing a 27-run win. Shubman Gill hit a four on his first official delivery in the chase. The second over ended with Venkatesh Iyer enjoying a stroke of luck because MS Dhoni had trouble catching. During the fourth over, the left-hander hit three fours and a six to attack the CSK bowlers. After 6 overs, KKR reached 55/0 thanks to their opening pair's form. A spider-cam string saved Gill's innings during the 10th over as Iyer completed his fourth fifty of the season and took KKR to 88/0.

The match was then turned by three quick strikes from CSK. Ravindra Jadeja caught Venkatesh Iyer and Nitish Rana with a good catch by du Plessis in the 11th over as Shardul Thakur dismissed both. CSK powered to three wickets for nine runs in the next over when Josh Hazlewood trapped Sunil Narine at the ropes as Jadeja took a great catch. The right-hander of KKR, Subhuman Gill, was trapped in front of the wickets by Deepak Chahar in the 14th over, after scoring a fifty. KKR were then pushed backwards by a double-wicket over from Jadeja, which dismissed both Dinesh Karthik and Shakib Al Hasan.

In the 17th over, Shahrul picked up his third wicket, dismissing Rahul Tripathi, while Hazlewood bagged his second wicket of the match when Chahar took an outstanding catch near the ropes to dismiss Eoin Morgan. Despite Shivam Mavi and Lockie Ferguson adding 39 runs, CSK ended up winning by claiming their fourth IPL title with a fine win. The opening bowling pair of Shakib Al Hasan and Shivam Mavi controlled the first two overs of the innings and nearly removed du Plessis in the third over. The ball could not be collected cleanly by Dinesh Karthik, and du Plessis was awarded a life. In the meantime, Ruturaj Gaikwad kicked off the innings with a four and a six.

They scored four runs each in the next over before completing a fifty-run partnership on the final ball of the powerplay. In the end, however, KKR broke the opening stand with Sunil Narine dismissing Gaikwad and Shivam Mavi taking the catch in the deep. As CSK neared the halfway point of their innings, du Plessis and Robin Uthappa each hit sixes as they went after Shakib. KKR bowling was attacked by the two, who reached fifty runs partnership within 25 deliveries. The half-century is du Plessis' 22nd IPL half-century, who was playing in his 100th IPL game.

Eoin Morgan and company got their second wicket after Narine trapped Uthappa before the wickets. The latter, however, continued to make merry as Moeen Ali continued to make the runs for the company, as du Plessis continued to do so. CSK scored a significant amount of runs despite the bowling of KKR and targeted them as they put up a third consecutive fifty-plus stand in the final. Moeen Ali, who scored 37 runs off 20 balls, and du Plessis combined to score 61 runs in the last five overs to push CSK to 192/3 after du Plessis was out on the final ball of the innings.